[[Event] Strategies & Tips] How to actually use Glyphs the right way!

I have yet to find a post that explains how to use Glyphs in an effective manner and what some of them actually mean. Since they have been released to the game I have spent a ton of resources boosting their effectiveness and trying out different combos on heros and I believe I have a pretty good grasp on how to murk your enemies! This post is going to lightly explain how to obtain glyphs in the cheapest way possible, which ones to keep as well as which ones that benefit certain heros more than others.

First up is how to obtain glyphs of all levels cheaper than the normal way most of you probably do. This is how I do it: For the first 2 starred orbs I use souls, the first being 2500 and the second 5000. Use orbs of gleaning for the rest of the way up until it resets back to the one starred orb. You could also use mutagen if you are a lower lvl and not really close to evolving a hero at lvl 180+, but that's up to you. I do not use rings to glean because I believe upgrading heros skill is better than a gamble on a glyph.

I'm going to bundle the last 2 parts of the post into one because they relate to each other, so here is what my 2 heros with the better glyphs look like. 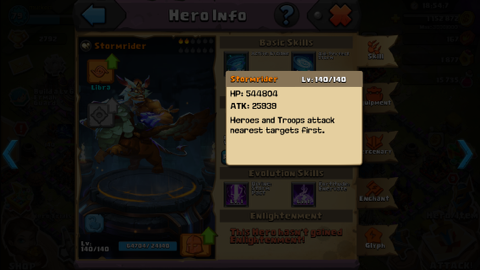 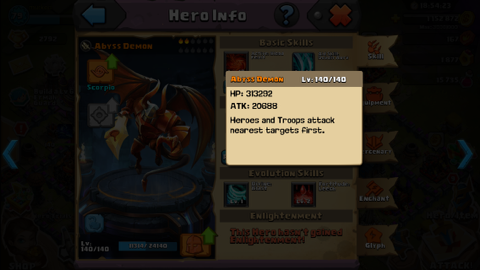 If you notice, these heros are only lvl 140 (2nd account, first was on Android and I now use IOS) and yet they have a ton of attack as well as a decent amount of HP. Storm rider is the best hero in the game in my opinion in terms of skill damage. I've been hitting opponents anywhere from 47,000-58,000 every second x 10 seconds depending on the opponent's defense. Take into consideration that this account is only level 79 and less than 6 months old.

Got a little sidetracked, back on task. These next 2 pictures are what glyphs I have on them and I will explain how some of them are better on these heros rather than my others. 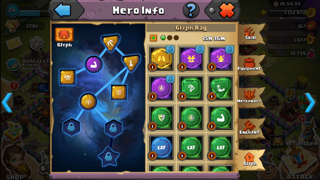 The first Glyph on the tier would be the second best attack glyph (Heroic Strength) that you could use. First being the red one. This glyph just boosts your hero's attack, which you use in every aspect of the game. Next down the tier is an HP Glyph (Heroic Vitality) which boosts, yep you guessed it HP. To the right is (Heroic Might) that benefits heros whose skills when maxed out (for me its level 25 for now on Storm Rider) are not that high of a percentage. At level 25 Storm Rider does 90% attack damage per second x 10, this glyph boosts it attack damage by X amount making it more like 96% for instance. Now for example, instead of hitting a normal 30,000 x 10 seconds I might hit 32 or 33,000 x 10. Underneath that glyph is the square one which gives not only and HP boost, but an Attack boost as well. The rest of the glyphs I have on there are just because they fit the space. They aren't on there because I want them to be, its just because I don't have anything better to replace it with at the moment. 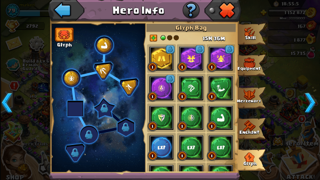 As for Abyss Demon, the only 2 I'm going to explain are the last two on the tier. To the right (the triangular one) is called "Heavy Swings". This Glyph boosts the hero's attack damage which is super beneficial to Abyss demon as it allows him to heal more. To the right is "Pavise" which blocks attacks by X amount percent. This benefits really any hero, but since abyss demon always charges into battle at the front of the line its beneficial for him to be able to withstand damage.

Id also like to add that a lot of people think they can only unlock a long tier of glyphs on just 1 hero, whereas the others can only have 1. This is false. If you click on the sanctum and click on ruminate you will have a hero pop up. Looks like this for example: 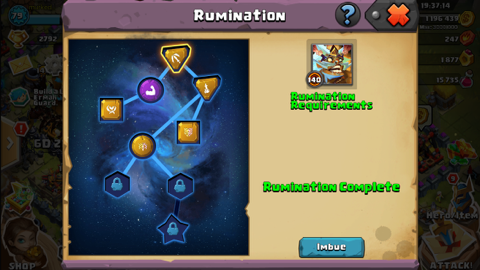 The next thing you do is click on the picture of your hero, for me its Storm Rider. Once you click the picture it will look something like this: 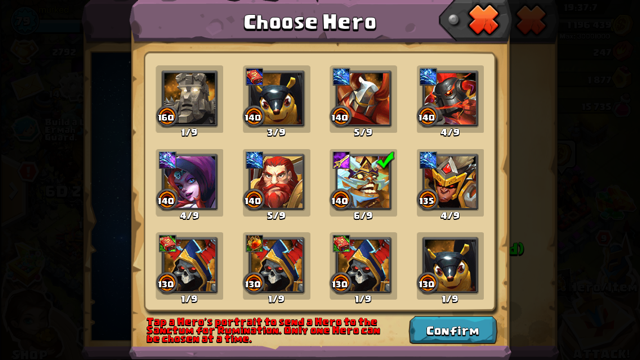 Now you click on any other hero that you want to ruminate and click confirm. I chose Ambrosia and now it looks like this and I'm able to add more glyphs to it, etc. 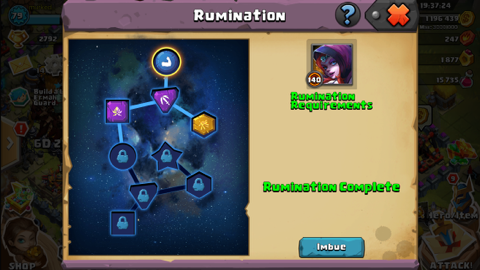 Keep in mind that in order to unlock more tiers down you have to have your Sanctum level higher. Mine just finished upgrading to 12 after I took these pictures, so I can unlock a couple more of them on some other heros.

I hope this clears up some of the confusion on how to use these amazing super boosts!

This is an excellent guide. Thank you for this great addition.

Also explain which glyphs to be used on which heroes. Thanx

Out of curiosity do you know what the best glyphs are? I just bought a second dodge with gem bits (gold) but i am starting to wonder about its use. I figured i needed a second with the current gold dodge on LS (who has  max dodge,  heart at gold, and 3 max dodge skills)  the intent is to use the 2nd on wolf who is not even started on the the divine path (but has max dodge, is 160, and has 3 max dodges on him). My concern is I should not have done it. What glyphs are prioritized over all other regardless?

Dragoneyr Rated on 3/27/18 3:00:10 AM
My personal experience with Wolf at level 25 scorpio is that he's best used offensively. I used him defensively with great results in the past, better than offensively. However, he's simply too poorly equipped defensively against Toxic Shaman, Ambrosia or the like who debuffs Wolf's defensive aspects. He doesn't suffer too much offensively, other than being slowed. His enlightenment also highly favors offensive capabilities in almost every aspect.