Hi folks my Name is Kubaja and i am a german player on the iOS Intl Sever, i really love this Game but this is an issue i had with the Game for a long time. It wasnt that big of deal, but with the addtition of the Coliseum and IGG dropping the ball even more on our Server i now need to address this. I know that this text probably wont reach any IGG Member, but hope dies last, right?

Okay now to the topic, the unfair advantage between Servers. I can only compare the difference between iOS International and iOS English because my main is on the first and my alt is on the latter. ( i check both Android versions here and there on my old phone, but far to rarely to make a fair comparison)

Lets have a look:

1. Quantity of Events
iOS Englisch has a lot more Events. Regulary there are multiple spending and buying events at the same time, i honestly cant remember the last time we had two spending events at the same time. Like how many spending events did the Englisch Server have this upatde? 3 Wishing trees and 1 LGW and additionaly some "spend and win big", something like that right? Well we just got our first spending event (LGW) this week  ... yaaay (and we got the patch like a week and a half later than the english version, so thats not the reason for the big differnce). Special Events: We havent had a "Build and Win" Event for over six months if not more. But thats not all, in the past 2-3 months IGG has dropped the ball even harder ... there were now multiple occasions where we had NOT A SINGLE EVENT for like 3-5 days. I mean we on iOS Intl have even the same Server Time as iOS english, why cant they just sync up the events too?

2. Qualtity of Events
Since forever most of our Events were outdates and simply worse than the ones on iOS english, especially the spending events. It looks like they fixed LGW for us now because its the same as on english, but its still to see for the wishing tree and other spending events. There needs to be some kind of compensation for all the time we were behind. Just so you get a glimpse what we missed in spending events till this update:
Glory Eggs, Weapon Shards, Hero Shards, Enchant Crystals, Weapon Material Packs .... and thats just off the top of my head, there is probably even more. And the same goes for the buying events, just two examples: 1. we havent had a single event where you could win purple or orange weapons, to to be more precise any weapons at all. 2. Snap up Sales, we only ever get one thing. Rings, Eggs etc. iOS English gets multiple things...

3. Free Heros
I think the last free Hero iOS Intl got was like in the very beginning of the year, january maybe february. How many did iOS english get since then? Acane Caster, Landslide, Won Ton, Enchantress, Berseker ... i lost count, correct me if i am wrong. And its not only that you get more Heroes overall, you also get them as shards. We get the full Hero, which means if we want to use that Hero for shards we only get 1200 instead of 1500.
And there was the 12 Glory Arcane Caster for 600k spend jewels fuck up ... because we usually get our update like 3 weeks after the iOS english version, the Timer IGG set for the AC Event ran out and the Event was gone. Eventually with the next update IGG gave us the Event back, but all the jewels you spend in the Month the AC event originally ran were gone and we had to start from 0.

These are the major points for me, but believe me there is more ...

For a lot of you these differences probably dont look that huge, but add it up over moths and moths and the Advantage gets quite big. I mean till the update with the coliseum it wasnt that big of a deal to me either. I was a bit envious, but thats it because the Servers were on their own and not interacting with each other. But with the addition of the coliseum IGG added a cross Server competitive aspect to the game, and in my opinion with such a game mode all the Servers competing should get treated the same. I mean it really makes me furious to know that a player who has started on iOS english the same time i have started on Intl, has spend the same amount of Money and Time into the game as me is stronger than me just by the choice of the server. And this always gets into my mind when i lose a close game in the coliseum against a player from iOS english "Would i have won without these discrepancies between the Severs?"

My hopes are pretty low that all this will change any time soon, but i needed to get it of my chest and at least try to get my voice heard.

What do you guys think? Am i overreacting? Or do you agree with me that this is a major issue?

P.S.: excuse any mistakes in spelling and grammar, but i am to lazy to proofread all that.

I'll go over how things work and maybe that will at least help you understand the situation.
There is only version of the game (TW version) and the rest are translations. Each translation runs on independent servers from the rest. For each translation there is a marketing/events/social media team of people. These people are responsible for coming up with events and generating interest in the game as well as additional revenue (basically their jobs depend on them generating additional revenue).
I agree it is unfair to have different events per version (only because of the all-inclusive coliseum). But the issue falls on a few factors:
-Poor regulation of number of events. Seems like there is no limiting of events of a certain type in a given time period. For example multiple buy or spend events in one period allowing you to claim several sets of prizes for one purchase or spend.
-No required events per day. Like you mentioned you went several days without an event on your version. This should not happen.
-Each version pulls their own revenue. More popular version (like English ones) are bound to pull in more revenue. This means more staff and more ideas and control over events and making sure there are no gaps. Less common versions might not have very much revenue and therefore are short staffed.

Zashibu Rated on 11/18/16 9:57:39 AM
yes, but all players are play coliseum, and english android&taiwan android players have a huge bonus right?

in italy we have one of the worst traslator ever. i think they are using google translate XD there are a lot of erros, and the events... well... in italy with monthly package is the same as playing in the english version without shop ahahah. that's crazy. in coliseum we can only die (italians die into coliseum, that's fun u.u ).
i'm not an english speaker but if i play an italian version, i just want the correct translations. you can report all the errors, but they ignore u

i hope a day it will be possbile to change server

Asian and russian servers seem to have much more powerful players on them than here in the US. I can only make assumptions regarding why this may be but suspect its due to a combination of how promotions are set and gem to local currency exchange rates.

You know in the end it really shouldn't matter as you should be matched with a player that is close to you in strength. So really the problem lies with matchmaking. I can understand there is a huge variety in strength and it can be difficult but it really needs to be fine tuned as often as possible.

Runningrabbit Rated on 10/16/16 7:24:18 AM
Well, I play on the italian server and colo is really impossible sometimes. I have reached a total of 5k strengh for eldorado but in colo i reach 2,5k with my low lvl weapons (compared to other servers). Many times the match up gives me some chinese or international players with 5k up to 12k+ (wtf)... Anyway a little more even events through servers would be a great + for other servers. We never had the event to "change" gems (don't know the name of it) where quou can trade for example 6k of gems and get 9k in return (just an example, don't know the numbers). I'm reading this forum since about 1,5 years now and it was odd to read what kind of events the int server has (like hero give aways) compared to us. Same for prices of materials, lgw and so on. I really don't understand why it is not the same on all servers specially now that all the servers "meet" in colo.

TheW83 Rated on 10/17/16 6:39:36 AM
You may also want to play around with your lineup. Put your best weapons on aids, take out a pisces hero, put in a libra. It's been said that the system is a bracket style and if you're at the bottom of your bracket you could have a really rough time.

Heyho,
its me again. I dont know if it was a coincidence or if it was really my Post but right the next Patch after ma Post we suddenly got a lot of events and even 1500 free Won ton Shards. It slowed down a bit since then and isnt a fair comparison to the englisch server still, but overall its an improvement. What really grinds my gears is an event i am waiting for since the beginning of the year. Its the "Build and win Event", on iOS Intl we got our last on i think it was in February or March...i dont know how many iOS englisch got in that time frame, but i know there were at least 3 in the last 2 to 3 Months (including the one that startet today). I was really hopefull today since we got the discount for armor and speed-ups, same as iOS englisch but then again no "Build and Win" event and this really really annyoing and frustrating. So if any IGG Member reads this or a Mod could pass on this thread to one, please give iOS Intl this event and dont let us wait a full year for it.

i'm playing in two version more than 2 years, english and russian, both on android. And i just understand, WHY all "translated" version just not copied events from main english? and now all plays together in coliseum, and every "russian" can see how many "english" players have better heroes/equipment. 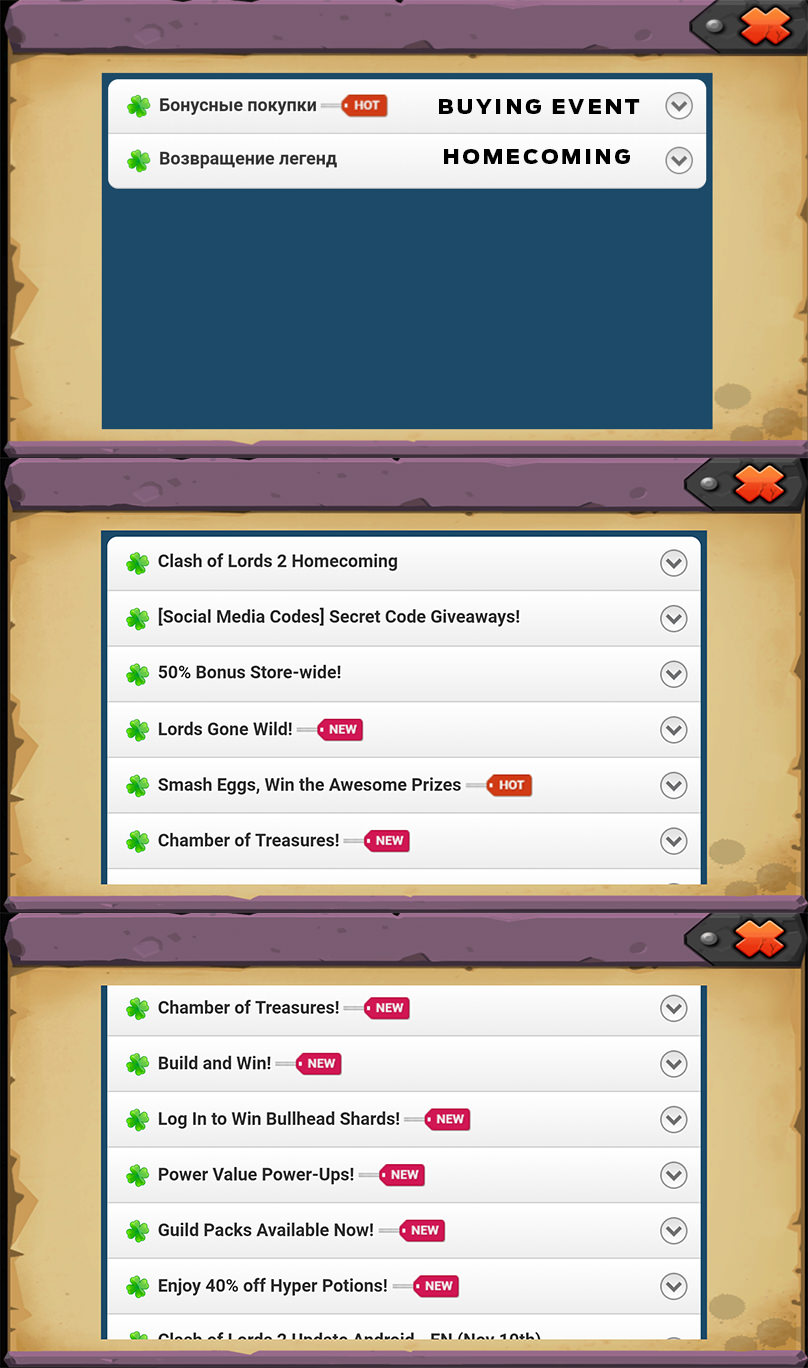