What is piercing attack

My best guess is it's the counter glyph to "block attacks".

I am only speculating here:

think that pierce counters the shield/block % but does nothing against damage reduction.

i also am not sure how tyrants brand relates to block, but i am guessing that it does not bypass it, it only bypasses the damage reduction

Metallord39 Rated on 10/6/17 2:42:20 PM
Hmm. Good response Steve. Interesting way to describe block as a shield so to speak. I assumed with block, like in your example, you'd have a 25% chance to block a full, normal attack..not just a percentage of the one attack. But maybe youre right..and if you had 25% piercing attack, it would completely counter that block.

StormOwner Rated on 10/7/17 6:02:44 AM
That's very possible, as skill dmg reduction also works the way you described - it applies before/after dmg red but just for skills. So it's important to add pierce and block works ONLY for normal attacks, not skills - IGG confirmed that on their fb page

@stormOwner i didn't realize that pierce and block only worked against normal attacks, that makes it redundant to damage reduction... kinda silly. Damage reduction works against auto attacks and there is not that many ways to bypass it, tyrants brand only works for skill attacks. why would they add another damage reducing attribute that works the same as the previous?

IGG really needs to explain these glyphs a lot better

I think block was introduced to balance atk dmg and skill dmg, as skill dmg had its skill dmg red before while atk dmg didn't. But i'm not sure if the fact that block works only for normal atacks makes it useless.

So mathematically it could be expressed this way:
Attack*(1+Dmg-DmgRed)*(1+SkillDmg-SkillDmgRed)=TotalDmgDealtToTheBuildingBySkill

(I wrote here TotalDmgDealtToTheBuildingBySkill because i didn't test on heroes, as it's much harder to get exact amounts on them - one of the reasons is power multiplier that affect dmg dealt and taken, which exact values i don't know)

Now, assuming hero dmg red given by glyphs or enchants worked in the same way as dmg red from sanctum, dmg red wouldn't be capped, but its effects would depend on how big are the dmg buffs of the attacker. And that means block would still be able to reduce big part of the dmg taken, because hero dmg red would be much less effective

No..No
The Glyph "piercing attack" works just like Tyrant Blade.. but it not Stacks with it.
so now you can play various equipment with a chance to piercing the DAMG RED.
Im using it on my GS with Hammer and it works.


dunno what you guys talking about...

I throw the pic proof here in case someone didn't see it. It clearly states block and pierce works only for normal attacks.
@NeedleInc not sure how did you come up to your conclusion. But what's the point in having an attribute similiar to Tyrant Brand ability or dodge that work for the same type of attack (skill or normal atk). Those 2 attributes give a chance to ignore dmg taken or dmg reduction. Giving a 80% and then 70% chance to ignore resist effects doesn't seem probable for me.

As it's extremaly hard to test with high accuracy how atk dmg buffs and debuffs work, i didn't test it myself, so i'm also speculating here. The most probable answer in my opinion is pierce and block counter each other, simply because currently both cap at 70%. Also 70% additional dmg red that can't be countered is too overpowered to exist. The safest solution for pierce and block is to work same as dmg and dmg red - pierce increases atk, block reduces it. So mathematically for atk dmg it could be expressed like that:
Atk*(1+Pierce-Block)=AtkDmg

Pasting it to my theory i tried to explain above, the total atk dmg value would look like that:
Atk*(1+Dmg-DmgRed)*(1+Pierce-Block)*CritMultiplier*PowerMultiplier=TotalAtkDmg 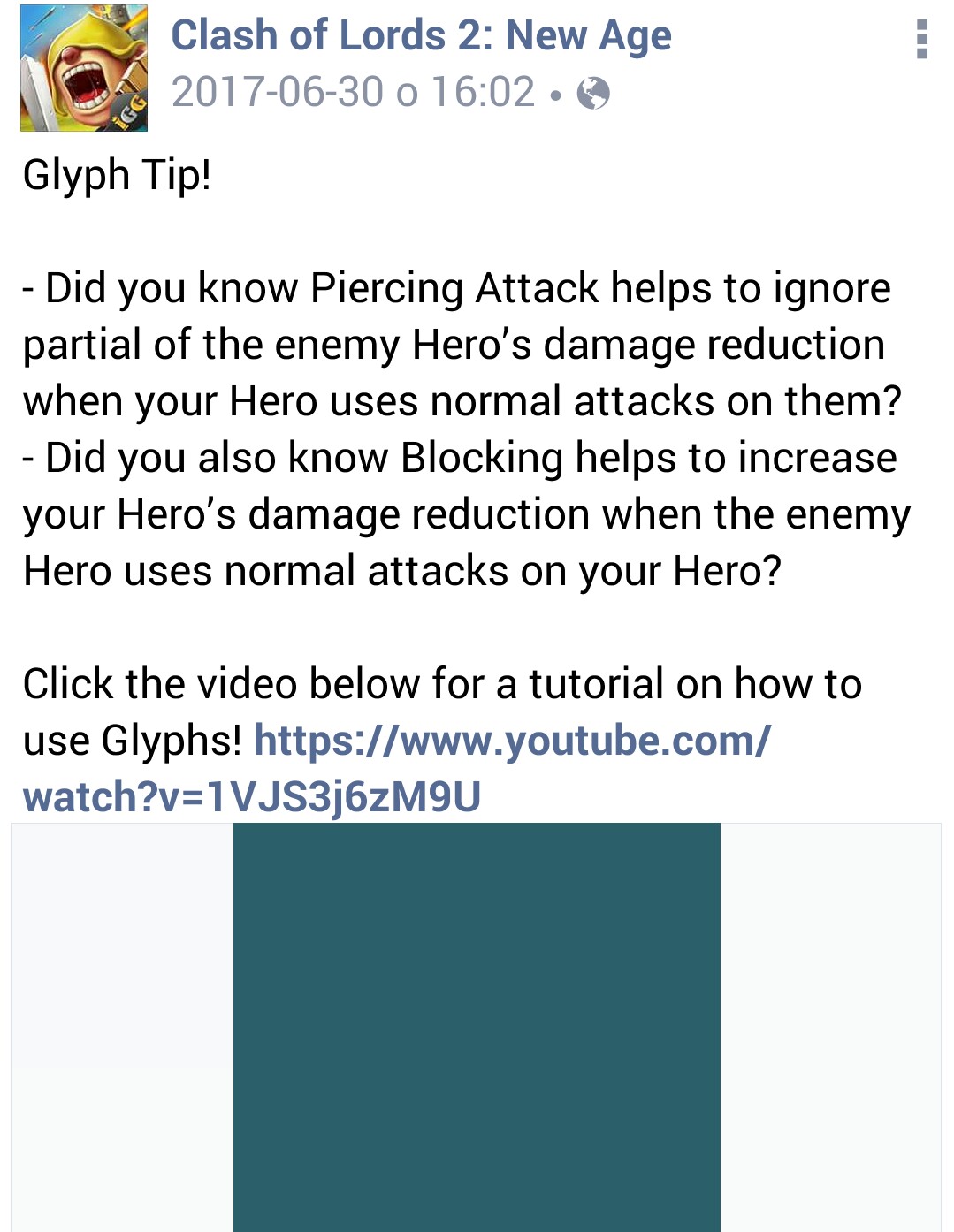 Little update. Managed to test pierce attack and i'm pretty sure it modifies only Dmg Red - so basically it works the same as it's written in IGG's reply above, but not like i thought before.
Additionally, it works only for normal attacks and it doesn't give a chance to ignore dmg red like tyrant blade does.
What's worth noting, when the enemy hero doesn't have any dmg red buffs, piercing attack (and probably block too) is useless.
That's the formula for AtkDmg:
Atk*(1+Dmg-DmgRed*(1-Pierce+Block))*AtkDmg*Power*Crit

Only thing i'm not 100% sure here is block which i didn't test, but giving IGG's explanation above and how pierce works, that's the most reasonable solution. Hero Dmg Red in fact counters Dmg as i assumed before.

Dragoneyr Rated on 11/2/17 6:50:47 AM
Power in this case is a relative number and not an absolute number. The difference in power modifies the total dmg output by I believe up to a max of 25%. But if this glyph indeed only counters dmg reduction in normal attacks, would that mean that it works against both AL or Bsk aids in the same way? You say that it doesn't ignore dmg red. So Bsk aid would still completely counter this glyph. Theoretically, were this glyph to ignore bsk aid partially, then it'd have been good for older heroes to keep up (with the exception of the obvious ones)

StormOwner Rated on 11/2/17 10:04:11 AM
I tested on lv 60 bot bases in RR and everytime the defending hero had dmg red buffs, pierce worked. I did more than 10 tries so the theory it works as tyrant blade is definitely incorrect. So, although i didnt test on heroes with berk aids, most likely pierce is useless against berk aids, as they dont grant dmg red, but only limits dmg taken to % of max hp

SteveSapenis Rated on 11/6/17 3:40:31 PM
i have been thinking about some builds where pierce could be useful and i think i am going to add it to all my auto attack builds. ie AD, SM, RV, SR and AMB ext. Couple questions about your testing, does it work with thunder blade procs? any noticeable difference against base attacks, does it bypass the hero alter damage reduction, could you melt a landslide on the alter with it. Thank you for sharing your test results.

StormOwner Rated on 11/6/17 6:03:35 PM
Not sure about ThB, didn't test it as i didn't try to determine its dmg to single target (assuming ThB deals x% atk to y targets). I'm pretty sure pierce can reduce dmg red of hero hall, as i tested pierce gets through dr active as well as enchants and talents that grant dmg red.

StormOwner Rated on 11/6/17 6:32:53 PM
Against lv 120 unevolved heroes with low dmg red my 15% pierce glyph lets my ad crit go from 103k to 107k so not a big deal... I believe it's much more effective against heroes with high dmg red values such as rv or ls. Thats because the higher dmg red buffs the more % of dmg red pierce can remove, for example 50% pierce takes 80% dmg red to 40% dmg red and 40% dmg red to 20% dmg red. In first case 40% of dmg red was removed in 2nd case just 20%. So answering your last question i think pierce can work very well against heroes stationed on heroes halls

thanks for the update Storm.

I have been testing the Life Drinker Star on pan goli and rath recently and noticed a couple things.
-works with auto attacks
-works with thunder blade procs
-works with skills with direct damage
- pan goli received large heals when using skill and divine
-does not work with DOT, damage over time, or bleed affects
- pan goli's bleed affect did not work
- Rath skill or divine did not heal, divine is a life leach but the LD star did not provide any extra healing
- Toxic Shaman skill does not heal i have heard, but i have not tested, 15 more days and i will confirm

I have two accounts and one is a wizard team. i have been seeing more and more ambrosia's come back to the top 300 teams, so i was thinking about maxing one out, full enlightenment and glyph tree. i have seen some with 1 million Hp and 60k+ atk. using atk, pierce, and life drinker could make a pretty solid base defender. same build would probably work for all auto attack type heroes.