W83, there is a flaw in your reasoning.
If one doesn't have much time to play, losing quickly all 10 LL battles is better than not attacking at all, making it easier to farm mutagen the next day.

TheW83 Rated on 5/17/16 6:02:06 PM
In that logic I can somewhat understand. If that is the case then you should try to lose against people with heroes defending so you don't interrupt the goals of others doing what you're doing.

When I first asked whether IGG was lying or just incompetent, everyone was pretty sure about trophies influence in GC matchmaking except for a few people.

After a lot of effort and insistence, IGG finally admitted that trophies have no influence. I even believe that they changed this behaviour in the last weeks.

However, I insisted that they were still lying or at least not telling the whole truth.

Now, for the second time they admit that there are other factors.
Funnily enough, they call it a random factor. Given IGG's reputation, I don't buy it that this factor is only to prevent the same guilds to be matched week after week.

After several lies, after the previous thread about GC matchmaking being closed without any justification, after IGG's attempts to hide other "random" factors, I continue to suspect that IGG may be benefiting those guilds which give them more money.

It's very easy for IGG to take into account that there are heroes better than others, for example. It is and always have been very easy for IGG to correct their algorithm. They simply don't want to do it and keep BSing us as far as we "allow" them. It's up to us to keep pressing them enough, hoping that they won't BS us any more. 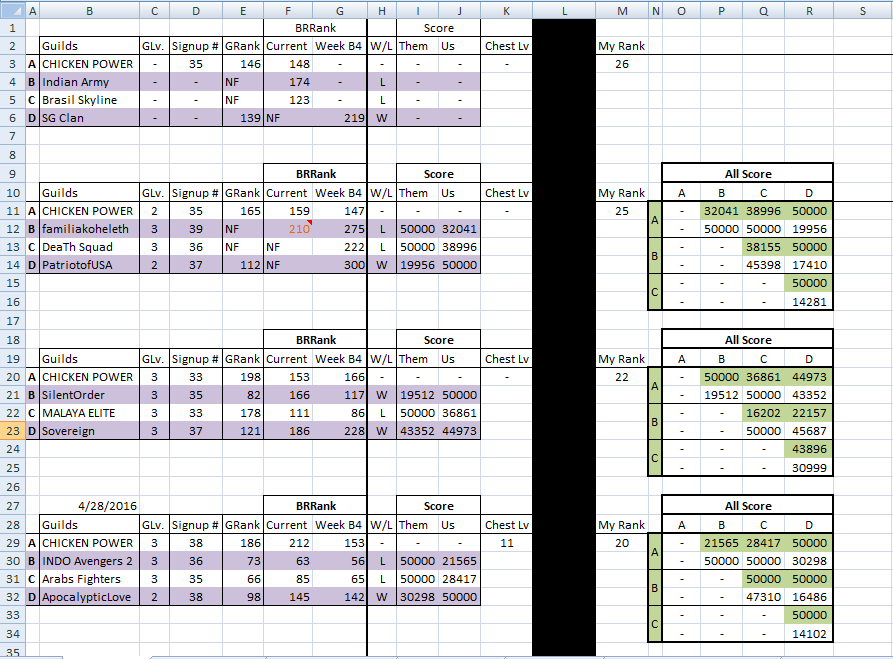 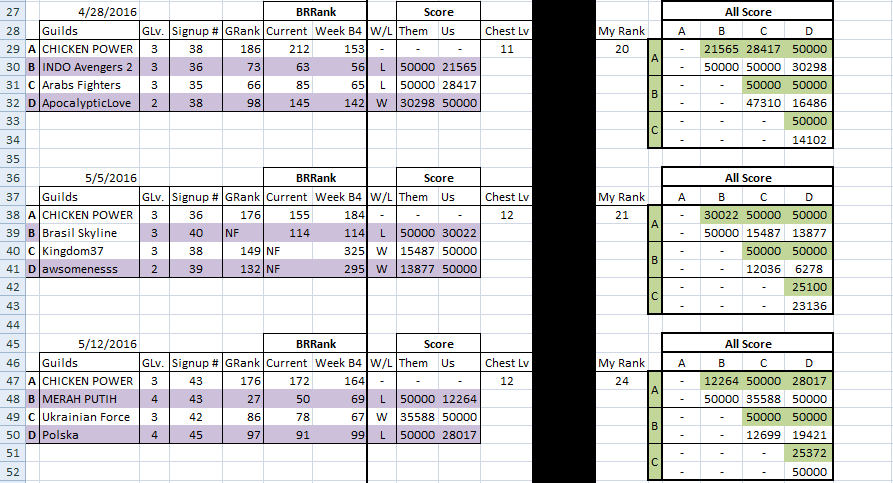 I got here a couple of weeks of GC data. From looking at the GRank separations from our match ups, it's very easy to see that it either doesn't matter, like W said, or that it works like the signup #, in ranges; in this case as loose as 27-2xx, which is a pretty huge gap. Personally, I have to agree with W because I just don't see any correlation between trophy/guild rank vs. gc match ups. In any case, if the guys that are constantly suppressing their trophy trying to get easier opponents AND failing, try doing the opposite. Raise your trophies to as high as possible and try to see if you get matched up with even beastier opponents. I mean, what do you have to loss, you're getting screwed anyway? At least, if it happens that you get slaughtered even faster than before, maybe, just maybe trophies matter. I would attempt this with my guild, but I don't have control and we have a lot of 'passive' players, including myself. 1 more thing that your guild could do is try skimming your 'top' players according to GC signup and see if it helps with match up. For us, there's a few on top that doesn't even end up as keeps. If it does make it better consecutively, probably should tell em to let go(dust) of their 'older' heroes.

On another note, signup # seems to play a MAJOR factor in determining match ups and I think that should be scrapped. I have no idea how matching is way in the top but if the #1 and #2 guild can avoid each other almost constantly, the other 6 guilds are probably gonna be upset. Now by no means that a guild with 10 ppl should matched up with another with 40. But if IGG can gauge players, by whatever methods they use, they could easily use those parameters, (total player power) & (average player power) for ppl that signed up, I think they can match up guilds pretty evenly. If it so happens that a guild is matched up with another that has more than 5 extra ppl IGG could just implement a 'Buy more chances with jewels' option for ppl that has already finished their 3 atks and paying amount will be adjusted according to dmg/points already acquired.

Lastly, on how IGG actually calculates player power. If they are gauging every hero the same, much like they do AutoRR calcs, then they really need to change it. It really isn't that F**KING hard to apply a multiplier to some freaking number and ppl's been saying it for ages. So, c'mon IGG wake the F**K up. If you need 'actual' numbers how about running some simulations in the dev build with maxed out heroes 1v1 and determine individual win ratio and use that as a bases for the multiplier. I mean, I'm sure you guys already have done so, how else are you getting those dust numbers?...

That's my 2cents, thanks for reading.

TheW83 Rated on 5/17/16 6:00:50 PM
Thanks so much for the data you've collected. What's funny in our guild we were at around rank 30 for a few weeks and matchups weren't too bad. Some of our players went back to the primary guild and we dropped to around rank 65ish. It was then we faced Superheroes, Pantheon and another guild in the top 15. I don't know how we got that matchup but it was pretty hilariously easy for the other three. Those 3 guilds on the other hand were significantly closer matched than we were to any of them.

svith Rated on 5/17/16 8:24:59 PM
IGG is lying or at least omitting facts, W83. I have also been collecting data in the last 4 weeks and only in the last 2 things are making sense regarding the top5 heroes power. The data I have been collecting includes level, trophies, equipment and top 5 heroes levels of each guild player. Four weeks ago the same thing happened to our guild. We faced 3 guilds leveled between them, but all of them had much higher trophies, equipment and hero power (level, evolution, skills, mercs, etc.) than ours. By the way, our signup count was 42 and all others 32 and 33...

I certainly didn't mean to come off like that, wording issues and what not, but my point was that W83 is one of us fighting to improve our game play and he/ you certainly wouldn't listen to IGG rhetoric. For that I apologize as I rushed it and editted poorly and I know more than most about his personal feelings and would NEVER be IGGs bitch. Anger was @ IGG rhetoric only.

My lower guild is for finding young talent out of the box so its just very young players. Basically those low players do run up trophies quite high and have nothing past a possible Virgo but fight 150 Pisces SH because of high trophies.

The higher guild I cleaned house and there are no low end epics with high evo's at all. Previously there was a 130 w a Capricorn Pounder w high trophies and we got 50ked  in a few hours almost every round
Basically it was our main core of 5+ and some low levels up and coming up after I booted very good players including above who refused to listen to our elders and we finally got to 2nd place after months.

We still fight guild level ranks in top 50 and 100 oft though we are @ a much lower trophy rank but it's not another 2 great teams.

Frankly I booted all of the talent because of bad GC matching but the guild suffered in BR and quild quests being unfulfilled so having a low member count hurts.

Once I filled the guild with crap players who are very low their high trophies became instant 50k again and again.

GC matchups have been horrible to many. . Since its inception every okay to great player takes a loss as an issue with the guild and runs away when it's often not the guilds fault unless your in an uber guild, top *

So yes trophies make a difference but it has nothing to do with power rankings, my okay Capricorn high guys were the same result as of a bunch of meh level 30+s. GC has no means but to make us spend or quit a good guild or boot a good player.

While the #1 guild is fighting rank 50s and stuff

Everyone has legitimate complaint on gc . How does the number 1 ranked and number 6 ranked guild get to play a guild ranked in the 30s . One guild has over 35 people with 4k trophies , the guild I'm in 0 over 4k ,

Can you guys post here the name of the guilds that were matched together?

svith Rated on 5/22/16 7:06:55 PM
Thank you, djhammer and Davey! I thought I could tell you something about why were you matched against those guilds, but in fact the actual mechanism makes no sense. The only explanation possible seems to be favouring big spenders, assuming for instance that SE members give IGG more money than yours. Well, maybe you want to "force" IGG to provide more fair GC by doing what I ask here: http://col2.forum.igg.com/topic?fcid=264&ctid=193972

If looking at rank alone this matchup is easier for us than last week and last week we were about around rank 85 or so.

Basically here's how I think it works.
Your top 5 heroes are those who earn the most gold for you in auto raid. Select your top ones and then look at your gold total/10 min. That's your top 5 hero value.
I only use 3 of my top 5 heroes when attacking.

That number and total equipment power is added up for every member participating in GC. Then they are matched with other guilds. Some guilds might have a similar number of "points" as another guild does with more members and that's where number discrepancies come into play. I believe there's also a +/- x% margin to ensure matchups are made.

djhammer Rated on 5/19/16 6:26:17 PM
I know we're knowwhere to superevolution total hero power , just don't see how they came up with matchup

svith Rated on 5/19/16 8:31:17 PM
I can tell you that I tested this same idea 3 and 4 weeks ago and it failed, ie there was no match. I can also tell you that the order of the members within the same guild doesn't follow this idea. However, in the last two weeks we have been facing guilds where total top5 hero power seem to be much better balanced, with a deviation not greater than 5%. If the equipment power is added things get unbalanced again though. So, as of now, I don't believe that equipment power has much weight as a factor or is used at all. Finally, I am more prone to believe that the top 5 heroes are not those who earn the most gold in auto-raid, but actually those which are highest leveled. By the way. SalyPete already proposed the same thing here: http://col2.forum.igg.com/topic?ctid=193843