There is a way to deduce the (almost!) complete evolution chart of any hero from the first 1-3 evolves.

And it works a lot like one giant Sudoku puzzle – all you need is a little bit of starting info.

From just the first evolve (Aries) you can deduce every column except for souls and shards:

1.)    The first 5 columns: Hero, Player, Skill, Glory and Mercenary Level are the same for every new hero beyond when Arctic Lord and Pan Goli were evolved:

If we assume each new hero that comes out follows the same format, this just leaves the Rings, Souls, Mutagen and Shards column unfilled.

2.) The rings and mutagen columns are unique for the first evolution (each requirement is different across all variations):

There are only two variations of ring requirements: And four variations of mutagen requirements: This means that if BK’s first evolution requires 500 rings (which it does), we can very confidently assume that he follows the first ring variation – And Voila! We have BK’s ring requirements. You can do the exact same kind of deduction with his mutagen requirements.

The only thing that stops us from completing the entire evo chart is that there aren’t unique soul and shard evolution requirements for the first evolve (some requirements are the same across multiple variations): There aren’t any unique variations in souls at any level, which means we’d need to know multiple evolutions to deduce which requirement variation each new hero follows. To deduce a hero’s soul sequence we’d need to know both the costs of the Libra and Scorpio evolves, as these are the first evolves that when combined provide a unique set of requirements we can deduce the variation from.
Fortunately no-one really cares about souls as much because they’re roughly the same requirements between each evolution anyway.

EXTENDING EVOLUTION INFO TO GEMINI:
The real kicker is not being able to deduce the shard sequences. We’d need to know the Gemini evolve requirements to narrow it down to the 12000/14000 columns, and then we’d need to know the Leo evolve requirements to fully narrow it down to the true variation.
HOWEVER:
There has only been one hero (Pan Goli) who has used the 14000 shard variation, whereas you can see that almost everyone else (all the new heroes) use the 12000 variation. So we can confidently assume this is the case with every new hero.
This means that to determine every evolution requirement apart from souls, we only need to know the first three evolution requirements.

I was able to find evolve info for EN and BK for the first few evolves – which gave me all the data I needed apart from souls on or after Scorpio. However I did know they cost 30000 souls at Taurus level, which means that they use either soul variation 1 or 2. Since only Djinni has used variation 1 and almost everyone else has used variation 2, we can make another confident assumption that they also follow soul variation 2. This means I could complete both BK and EN’s chart:

(BK and EN just happen to have the same evolve requirements.)

I can’t do the remaining heroes – Demon Slayer, Savage Chief, Carol and Won Ton – because I haven’t got any information on them. If anyone has evolved them beyond Aries let me know and I’ll make a chart for them!

*Disclaimer: This method of deducing chart values is completely based on making confident assumptions. Like assuming that evolve requirements won’t change much for future heroes and that new variations of each requirement don’t appear, just for one example. Because of this, the values that we can make are not absolute fact, just highly likely to be correct!*

IN CONCLUSION: Just by looking at the first few evolution costs of a hero, it is possible to work out the soul, shard, rings and mutagen sequences for all evolves. Pretty much anyone can do this provided they have cost info on or beyond the hero's Gemini evolution, and hopefully this post will serve as an aid for the people who do! Because of this hopefully more people will be able to figure out these evolution charts as more heroes are released!
Rate Delete Ratings
Manage

Can confirm that enchantress is good up to Libra, should be right till the end, I only got info up to Libra tho :p
/can I have permission to use the data in the main thread? 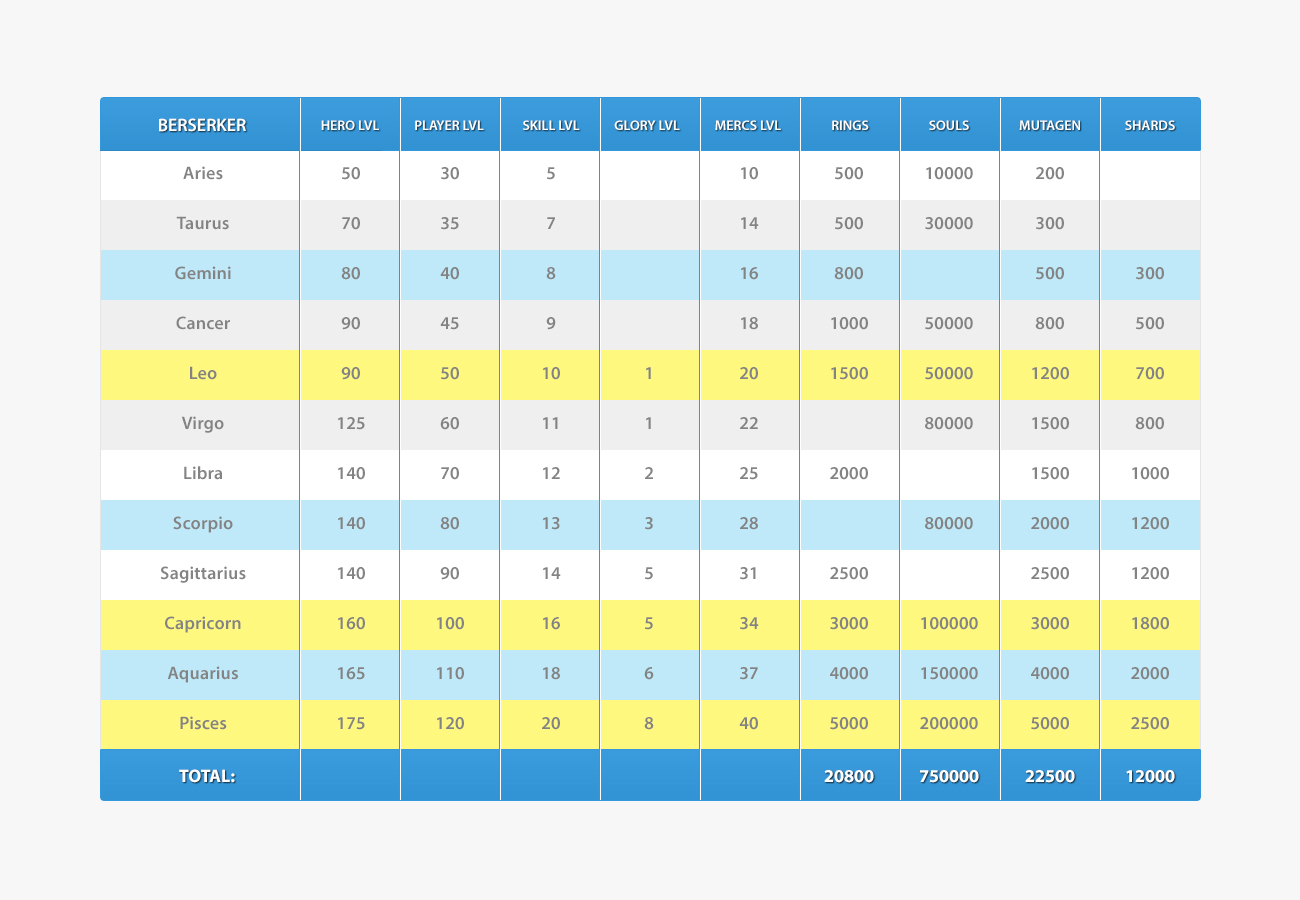 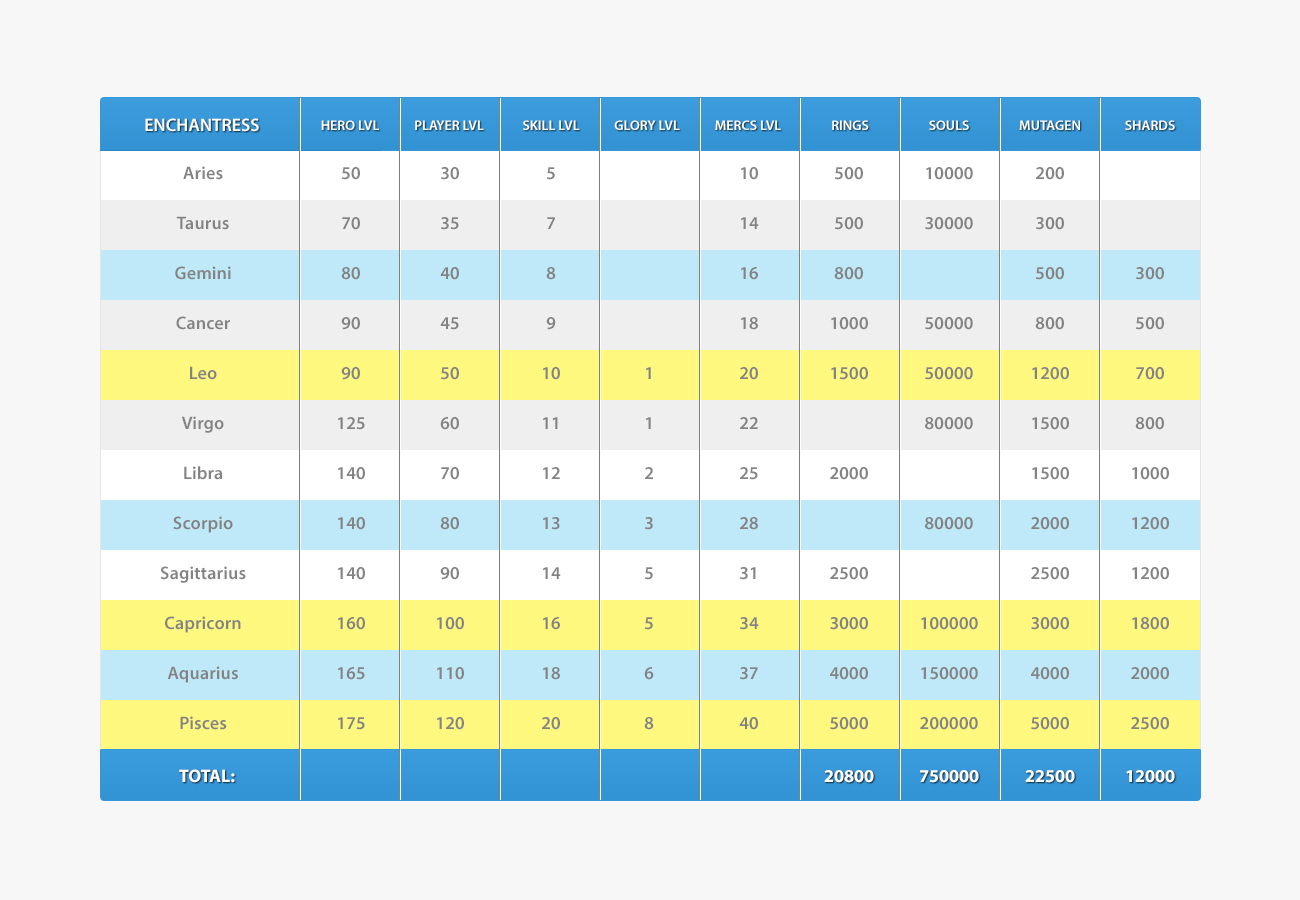 Wow great work thanks a lot

DS Leo costs 1000 shards which is the same as PG. I'm afraid to think that his shard totals match up because that's a LOT of rings especially since they don't give away his shards in events and you can't make his shards in the workshop. You have to spend 5k rings for 680 shards. That's 105k rings for just shards! Ouch! Then you have to count the glory which is probably 8. Thrown on an additional 40k rings.

Wheelie Rated on 2/16/16 8:13:32 PM
Added to another 41k for levelling up skill to 20/20 and another 21k for the actual ring requirements = a cheerful 207k rings needed overall! Which is the equivalent of 24 deity arena seasons, or 48 consecutive weeks worth. That's manageable right!

What if i had enough glory and shards of ds to get him to pisces...should i work on him coz i haven't invested anything in him yet. And all the other heroes i am running with, like ls gs amb m stuck at scorpio coz of lots of glory and shards required after that...

khimz Rated on 2/17/16 7:15:21 AM
ambrosia aquarius alone isnt that bad...i hv been successful before... but it largely depends upon other heroes too... when some of them refuse to go down and ambro keeps bombarding

Signature
Its not like pokemon....You dont have to catch them all...!
ign: kvothe
guild: Valhalla Elites(rank 2)
come join us!