Well, it highly depends on your priority.

There are certain extreme cases in which you will be wanting to spend crystals on.

You have a load of them and you set only one goal: GC optimization. I would say that you should stay open for more gamemodes, but here goes GC: 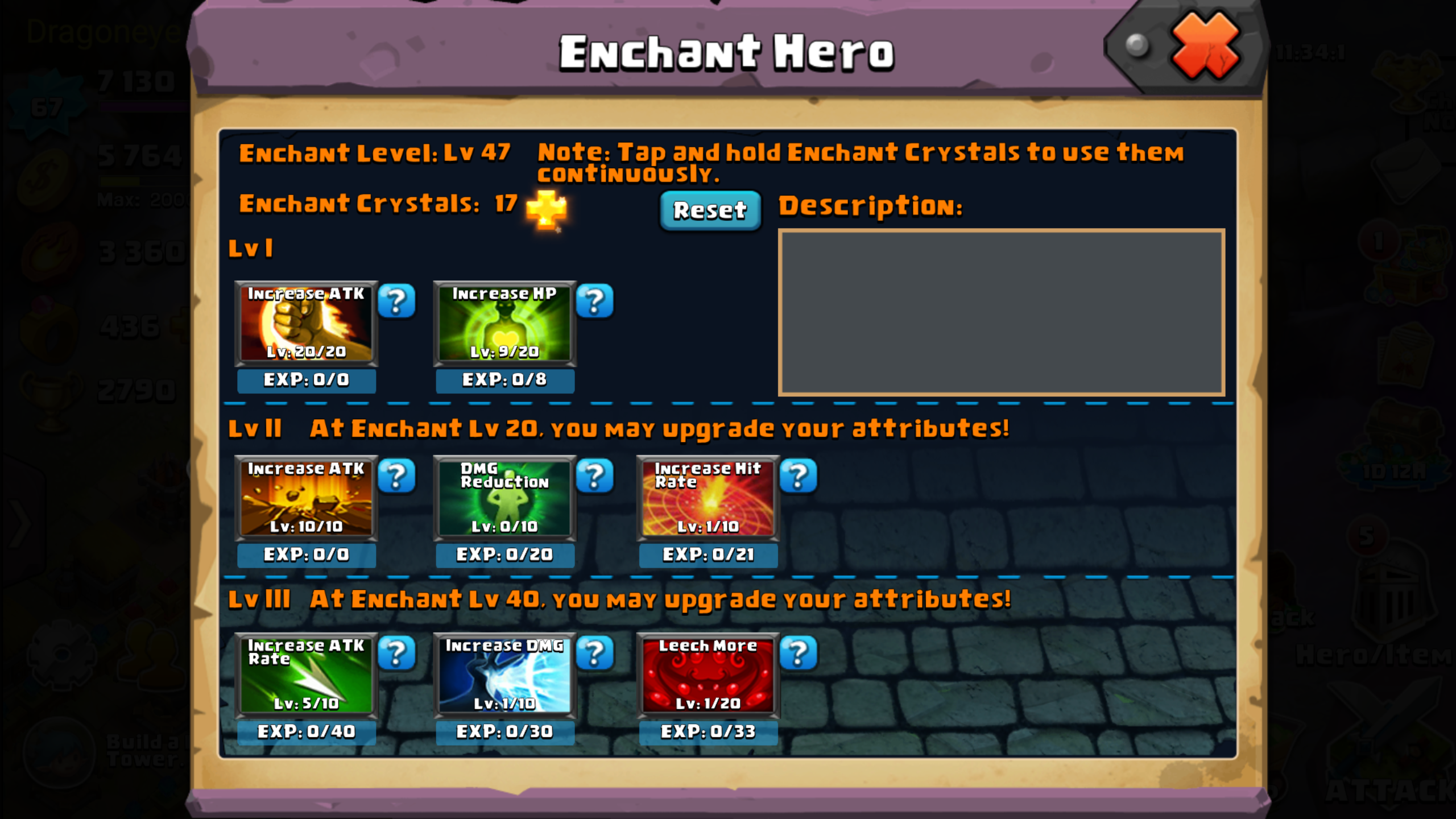 However, I don't like speccing into his special skill since it's only 1% per level (as far as this intel goes from me)
However, why 1 into hit rate? Because I want to get a better chance of striking my enemy succesful. Even 3% can make a difference of dodging a divine power or hitting with it.

The increase in atk rate will continue to grow, along with the main skill level and Blockhead's skill level to keep his speed up.

Now, that's the survivability of my heroes. There also has to be something that damages the enemy badly, right?

For that, I use Skull Mage, along with enchantments like so: 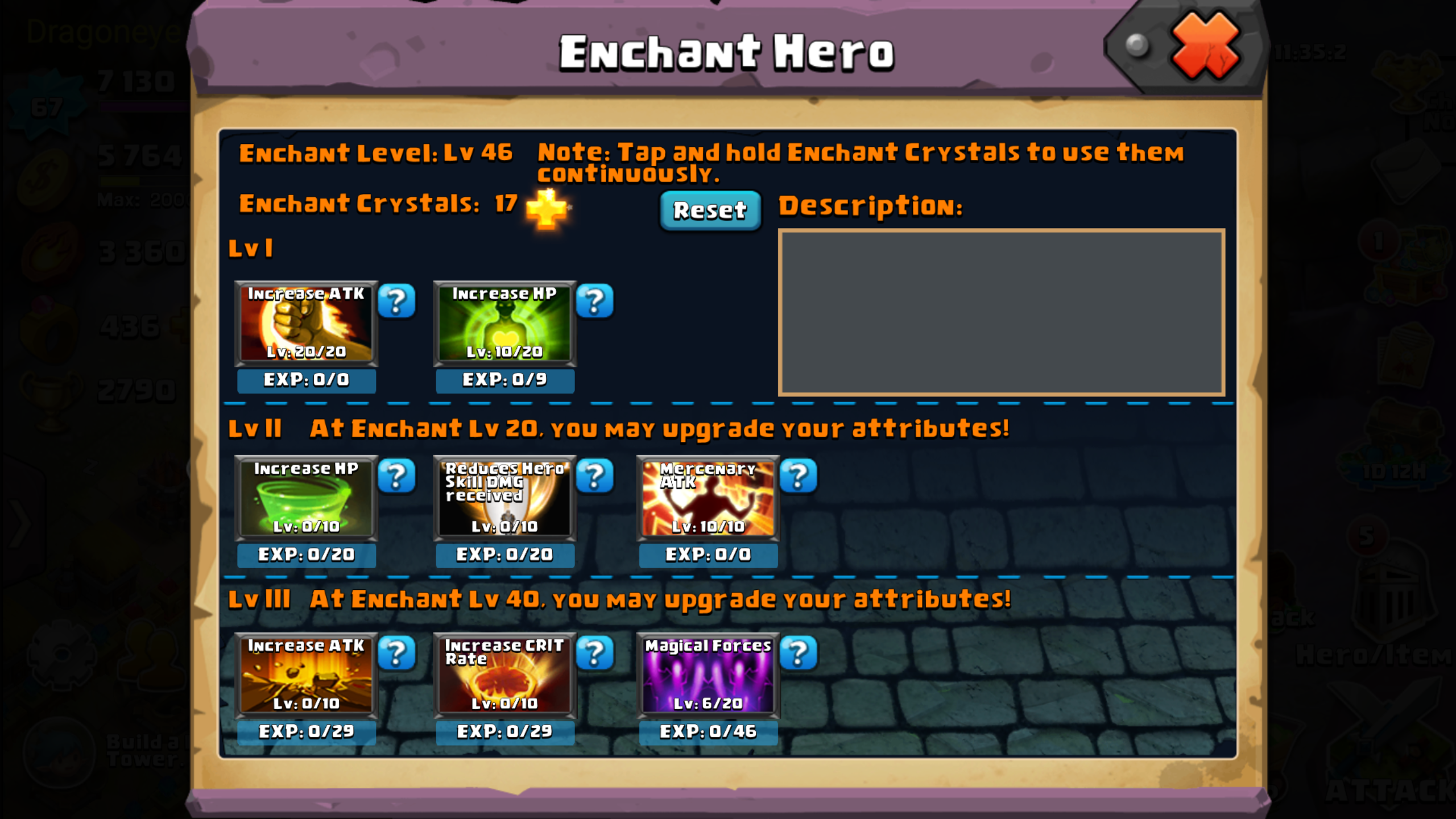 Again, 1 point into hit rate to make sure that it hits the enemy, although this one is more intended to strike succesfully on Hero Arena.

Further on, I spec my defending heroes into 10 points of attack each and 10 point of hp as well.

What else is there to say? I would think that speccing into dmg or atk power for Sapphirix would work when he uses his divine power and normal skill for more pack-a-punch on buildings in GC.

Good luck out there! c:

One of the prime reasons I tend to hoard resources is because it has worked out well for me over multiple games over the years.
a) Not immediately upgrading forced me to use the existing combo while all my opponents gradually grow. This forces me to 'make do' and be more efficient with what I have.
b) I have always preferred to avoid incremental growth and aim for a 'surge' which allows me to get a significant boost. That, combined with the efficiency mentioned above, allows me to make the most of what I have. Rinse & Repeat.

Dragoneyr - Thanks for the tip on Skull Mage. Working out beautifully!

Mass use example - 99 bronze Trials chests can be nice to open in one shot, no?

And when I finally reach 99 silver...  my bronze is back up to 95, Gold still only at 26. Still, it gives you a good idea of the ratios. Slightly better returns, considering it's half as common as bronzes. More gold and Mutagen than I thought.

Metallord39 Rated on 6/11/17 5:48:13 PM
I also got 99 silver the other day..Along with the same bronze and gold. Haven't cashed them in yet so thanks for post. I play the same way too..hoard resources and wait for a chance to make significant increase in my game play. Most are sick to know how many rings and Mutagen I currently have.

Better than the earlier one..?

Excellent research. It might just be coincidence. However, keys and more scrolls have been added to the game later on, so that might be the cause of the increased prizes

Looking for Glyph info this time...

I know this gives 300 Exp to Glyphs

Since it's been a couple of weeks with no new info about the question above, I figured I'd ask the IGG support team directly.

Yes. I know many, many people on this forum have described what they thought of their experience with support. But I figured since I'm asking for info, rather than asking for my account to be adjusted - my odds maybe better...?

My question was 'I have a fresh level 1 "Anniversary Aria" glyph. How many gold exp glyphs [each giving 300 Exp] do I have to put into "Aria" to get it to Level 40, the maximum?'

The GM had no idea about what I was talking about, so offered to take my email and get a response sent there in a bit.

The email arrived and the key line is & I quote -

"With regards to your inquiry about glyphs, we do regret that we are unable to divulge such information as upgrading glyphs requires different EXP for each levels."

Make of it what you will.

Oh wow. That's massive. No wonder they refused to answer, they'd scare away most players...

Thanks for the update though

Anyone know what this does?

Joey1234 Rated on 9/8/18 10:56:17 PM
It use to recover Mana when u remove glyph when a glyph is removed required Mana u get one in a certain Lev depends on santum n that just use to restore extra mana